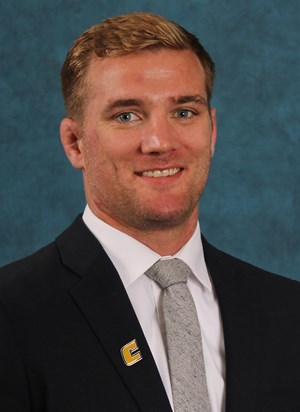 Kyle Ruschell is in his third season as head coach of the Mocs.  His first year was an impressive one that included a share of the 2019 Southern Conference regular season title and four individuals advancing to the NCAA Championships.  Three qualified for the 2020 NCAA Tournament before it was shut down due to the COVID-19 pandemic.

Ruschell joined the Mocs staff in June 2018 as assistant coach.  He was elevated to Interim Head Coach on July 19, following head coach Heath Eslinger’s resignation and earned the full-time position on Aug. 10, 2019.

The Mocs went 7-7 overall and 5-1 in SoCon action in Ruschell’s first year at the helm.  Among the seven wins was an 18-12 upset over No. 25 Campbell on Feb. 10 that gave UTC a piece of the SoCon regular season trophy.

Chattanooga went on to finish third at the SoCon Tournament and Alonzo Allen, Tanner Smith, Chris Debien and Rodney Jones all advanced to the NCAA Tournament.  Smith was also the league’s freshman of the year.

The 2020 Mocs were 7-9 overall and 4-2 in SoCon action against a schedule that included five ranked opponents.  Allen, Smith and Matthew Waddell all qualified for the NCAA Tournament.

Ruschell spent the previous eight seasons as an assistant coach at Wisconsin.  A former member of the U.S. National Team (2014-15), he was a two-time All-American for the Badgers (2007-10).

As a member of the Wisconsin coaching staff, Ruschell helped five Badgers earn seven All-American honors.  Four times in his tenure, Wisconsin finished in the top 20 at the NCAA Tournament, including a 13th-place showing in 2013.

Ruschell also coached Evan Wick to a third-place finish at NCAAs in 2018, along with Ryan Taylor and Connor Medbery to 2015 All-American honors.  In 2017, the Badgers sent nine wrestlers to the NCAA Championships, marking the program’s highest number of qualifiers since 2007.

In the fight to “Save Olympic Wrestling”, Ruschell was asked to be a representative for the sport at the Kentucky state capital as they passed a state bylaw to keep wrestling in the Olympics.

The Crittenden, Ky. native was a four-time NCAA championship qualifier for the Badgers, earning All-America honors twice at 149 lbs. The four-year letter winner served as team captain his junior and senior seasons.

Ruschell is the only two-time All-American from Kentucky and the state’s highest placer in the NCAA Division I championships. At Ryle High School, Ruschell was a two-time state and four-time conference champion.  He and his wife, the former Allie Johnson, were married in June of 2017.

Bylaw 13.12.1.3 - A member institution's sports camp or clinic shall be open to any and all entrants (limited only by number, age, grade level and/or gender).